102 Not Out is an ageless comedy movie and unusual story of a father and a son. After 27 years two legendary stars that are Amitabh Bachchan and Rishi Kapoor have come together for this hindi film. This is the most awaited movie for every generation. Amitabh Bachchan is playing a lead role as Dattatraya Vakharia with another lead role of Rishi Kapoor as a Babulal. 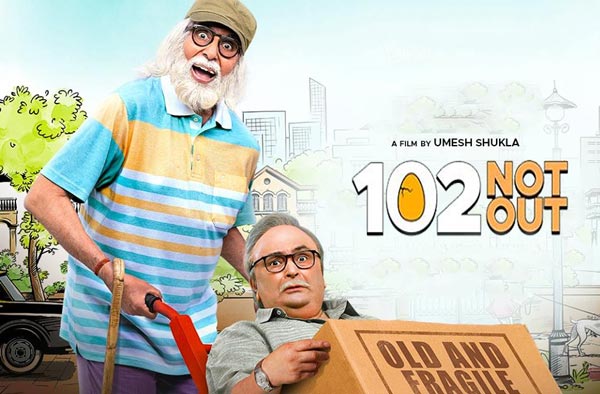 Dattatraya Vakharia lives the fullest life and he wants to break the record of living man that is 118 years old Chinese. He wants to live a stress free life in order to become the oldest living man in the world while His 75 year old son Babulal who has accepted old age. Babulal says that I have accepted my Budhapa that’s why his father tries to send him old age home.

The film is directed by Umesh Shukla while Saumya Joshi has written the story of the movie. The film is produced by Ashutosh Goswami under the banner of Sony Pictures Entertainment, Treetop Entertainment & Benchmark Pictures.

The Singers of the Movie are Amitabh Bachchan, Rishi Kapoor, Arijit Singh, Sonu Nigam, Armaan Malik and Hiral Brahmbhatt. The Music of the film is composed by Salim-Sulaiman, Amitabh Bchchan and Rohan-Vinayak. Lyrics are written by Hiral Brahmbhatt, Amitabh Bhattacharya, Saumya Joshi and Kaifi Azmi.

102 Not Out Bollywood Movie Video Songs: