Sonam Kapoor, born on 9th June 1985 is an Indian Bollywood actress. She has received several awards like Filmfare Awards and National Film Awards and is one of the highest paid actresses in Bollywood. 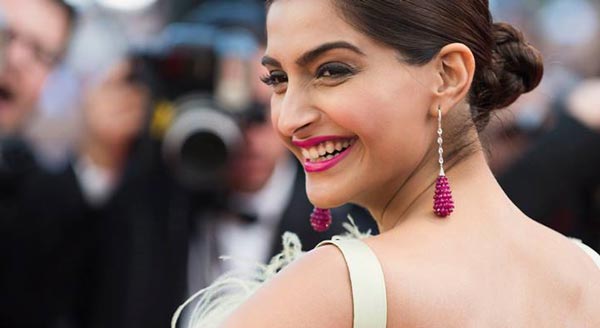 She has changed her name on social media platform as Sonam Kapoor Ahuja. She is also known for her outspoken personality and also as one of the most fashionable celebrities in the Bollywood. Audiences like Sonam Kapoor songs because of her zeal and energy.

Kapoor was born in Mumbai as the daughter of actor and producer Anil Kapoor and former model and designer Sunita. She has a younger sister Rhea kapoor and brother Harshvardhan.

In the initial stages of life she worked as a waitress which lasted just for a week. She had weight issues at that time. Now she is married to a businessman Anand Ahuja.

Sonam’s strong wish to be a director and writer helped him to assist Sanjay Leela Bhansali for the film Black in 2005. She made her acting debut with the film Saawariya in 2005 which didn’t went well.

Again in 2009, Sonam appeared in the film Delhi-6, which also received mixed reviews from critics and was not a box-office success. Soon success came her way with the film I Hate Luv Storys in 2010. This film went well on the box office.

The turning point in her career came with the film Raanjhanaa in 2013 which made her established in Bollywood. Sonam Kapoor movies also include Bhaag Milkha Bhaag in 2013, Bewakoofiyaan in 2014, Khoobsurat etc.

In 2016 she appeared in film Neerja. After two year absence from screen she appeared in Pad-man and Veere Di Wedding in 2018. Sonam Kapoor video songs are always amazing as she looks breath taking stylish.