Sachin – Jigar are the music composers of Bollywood and Gujarati movies. 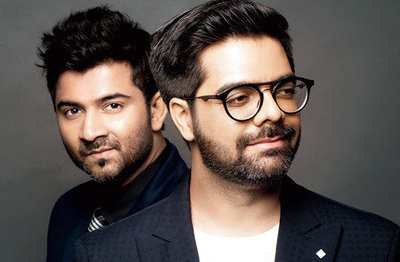 Mr. Sachin Sanghvi born on 14th June 1980, coming from Ghatkopar in Mumbai, he had an interest in singing from childhood.Later he became famous for his songs.

Jigar Saraiya born on 12 April 1985, had his interest in singing from beginning.

Later both the Sachin and Jigar joined the hands and started assisting Pritam.

They composed a song for the movie Life partner in 2009 and later they released their first independent song as a music director for the movie FALTU in 2011.

Both Sachin – Jigar scored for the hit songs like “Char baj Gaye”, “Le ja tu mujhe” and movies like Hum Tum, Shabana and Shor in the City.

In the year 2012 and 2013 they composed music for so many films. They also composed for albums of Humpty Sharma ki Dulhania in 2014.

They gave an instant hit song “Jee Karda” from the movie Badlapur in 2015. Later songs like “Jeena Jeena” and ” Sun Sathiya” were added in their success list.

This music composer duo has done not less than 500 plays and not less than 5000 television episodes. They also made their contribution in the second Episode of Coke Studio( India) season 4 on 12th April 2015.